IN THE BEGINNING Cover Reveal

Today Month9Books is revealing the cover and some excerpts for their Charity Anthology IN THE BEGINNING! Which releases October 25, 2016! Check out the gorgeous cover and enter to be one of the first readers to receive an eGalley!!
On to the reveal! 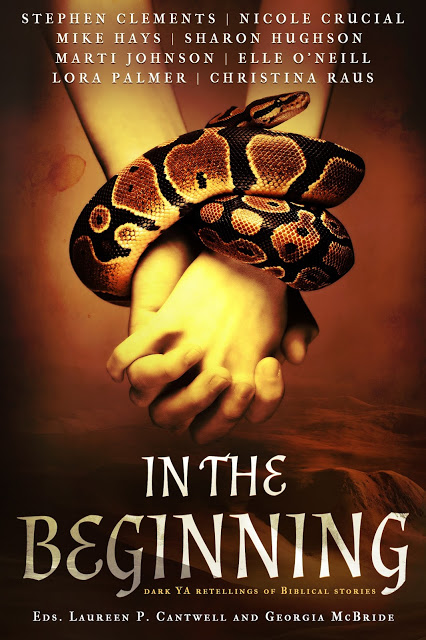 Title: IN THE BEGINNING: Dark Retellings of Biblical Tales
Editors: Laureen P. Cantwell and Georgia McBride
Author: Stephen Clements, Nicole Crucial, Mike Hays, Sharon Hughson, Marti Johnson, Elle O’Neill, Lora Palmer, & Christina Raus
Pub. Date: October 25, 2016
Publisher: Month9Books
Format: Paperback & eBook
Find it: Amazon
|B&N |Goodreads
In the Beginning (Oct. 25, 2016) –Eight authors
come together to build a powerful collection of dark young adult short stories inspired by the mysteries, faith, and darkness found within the Bible. Old Testament and New Testament, iconic and obscure figures alike are illuminated, explored, and re-envisioned throughout this charity anthology from Month9Books.
IN THE BEGINNING, edited by Laureen Cantwell and Georgia McBride
Daniel and the Dragon by Stephen Clements
A troubled orphan named Habakkuk dutifully follows his master, the prophet Daniel, into temples of blood-thirsty demon-gods, battles with unspeakable horrors, and bears witnesses to mind-breaking evil until his master’s zealous defiance of the king’s law seals their fate.
Babylon by Nicole Crucial
Far above the earth, in Second Eden, where moments and eternities all blur together, young Babylon befriends Sefer, the Book of Life. As Babylon awaits the moment she’ll fulfill her destiny, she and Sefer try to understand the world in which they live.
Last Will and Testament by Mike Hays
A homeless young boy, Baz, bears the weight of humanity on his shoulders and upon his body. When dark forces test a new-found friendship, Baz’s willingness to bear the ugliness of their world will be shaken.
The Demon Was Me by Sharon Hughson
Based on the story of the demon-possessed boy healed by Jesus, this tale provides a glimpse into a post-apocalyptic world where a teenage boy seeks to journey to a better land and yearns to discover the kind of man he’s meant to be, only to be hijacked by an evil spirit intent upon chipping away at the hope, faith, and resilience of its host.
The Deluge by Marti Johnson
A non-believer shares the story of Noah’s ark-building and the deadly downpour that follows. Fear, faithlessness, and the fallibility of mankind collide in a community where second chances aren’t unlimited and a better-late-than-never attitude just might be your doom.

3 winners will receive an eGalley of IN THE BEGINNING, International. Click HERE to go to Month9Books and enter!

This entry was posted in Books, Writing and tagged Cover Art, Cover Reveal, IN THE BEGINNING ANTHOLOGY, Month9 Books. Bookmark the permalink.

This site uses Akismet to reduce spam. Learn how your comment data is processed.